The Ex Ordo wall: A story in frames

The wall is the colourful centrepiece of our headquarters in Galway. A stark contrast to the clean edges and white surfaces that surround it. Its main purpose is to bring colour and vibrancy to our workspace, but there’s more to it than that.

The wall tells a story — our story.

It’s a recognition of where we’ve come from and the hard work it’s taken to get here. It’s a motivator to continue pushing for the goals we set ourselves. And it’s a reminder that there are researchers in universities all over the world who appreciate the work that we do.

It’s best experienced in person, but for those of you who aren’t coming to Galway in the near future (side note: you really should ), this article will serve as a quick tour of the wall, it’s contents and the tales they tell. 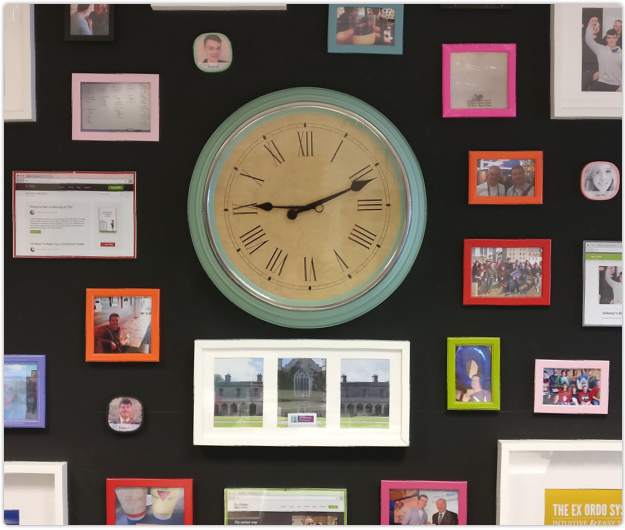 One of the more noticeable themes hidden throughout the wall are the five clocks spread out at eye level along the centre of the wall. They display the time in five timezones, and each one is linked to a customer of ours within that timezone.

The main clock in the centre showcases our hometown and home university, NUIG. We’re quite a proud Galway company — it’s where our headquarters are located, and almost 70% of our team graduated from NUIG.

Left of centre are our Harvard and Berkeley clocks. They provide us with the time on both coasts of the United States. And, to the right, the European Space Agency clock gives us the time in Paris, and the Nanyang Technological University clock provides the time in Singapore. 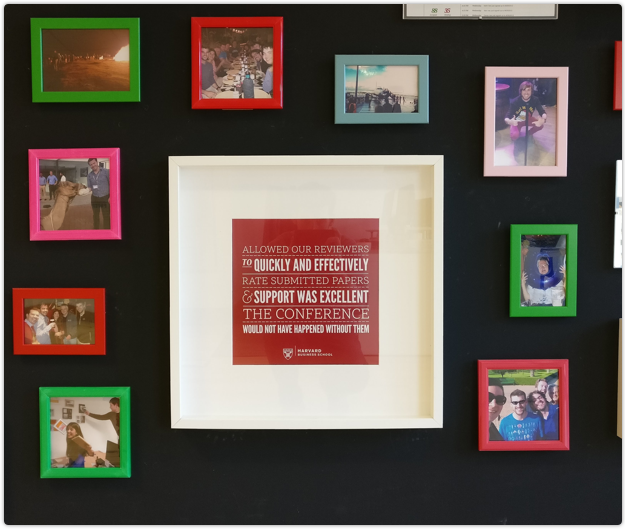 The eight large square frames spread out evenly across the wall contain testimonials from some of the top universities in the world. They contain kind words from chairs we’ve worked with in Johns Hopkins University, the University of Toronto and the University of Cambridge, to name only a few. 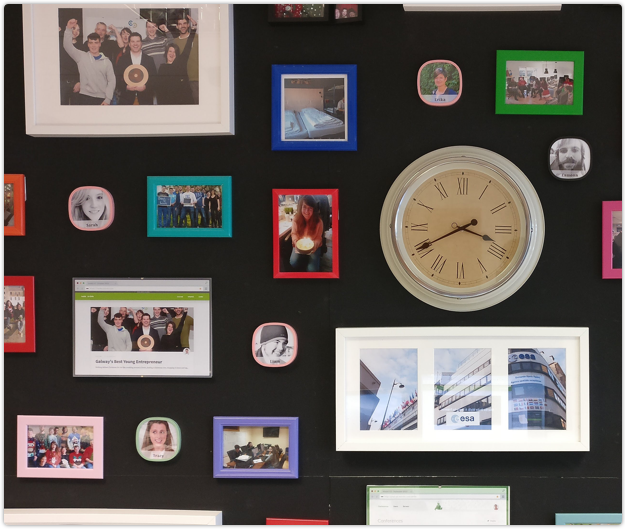 Ex Ordo would be nothing without the hard work of the people who have worked here over the years. At the time of writing, there are 22 headshots scattered throughout the wall. We also left a couple of empty spots waiting to be filled — maybe that will be you? 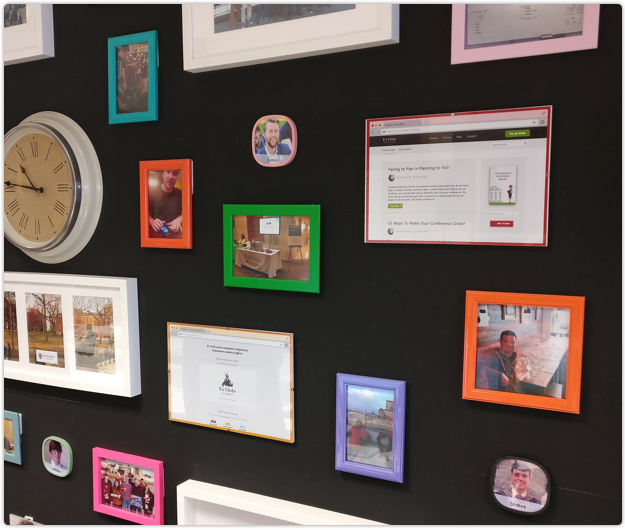 Ex Ordo is, at the end of the day, a tech company. We build software to improve the process of organising research conferences. Hiding in the sea of smaller frames are 18 of our most significant releases.

Those frames range from the first version of Ex Ordo (then Starolas) that was released in 2008, to our most recent release: our new Registration system.

As with the people frames, we’ve left some room for future releases. Keep an eye out for those. 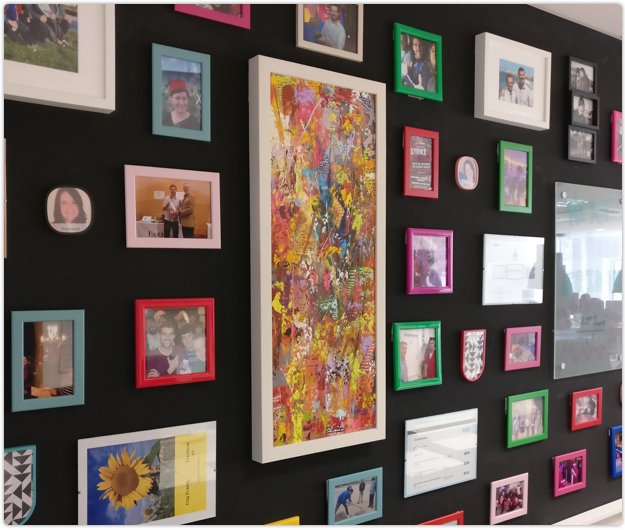 In 2015, the entire Ex Ordo team boarded a plane and headed for the warmer climates of Morocco. We spent a week there planning the next phase of Ex Ordo. It was a tremendous success and a pivotal point in our company’s short history.

The trip is scattered throughout the wall, in frames big and small. However, the most striking addition is this amazing piece of artwork. It was purchased by one of our co-founders, Dermot, in the famous, winding souks in the old town of Marrakech. 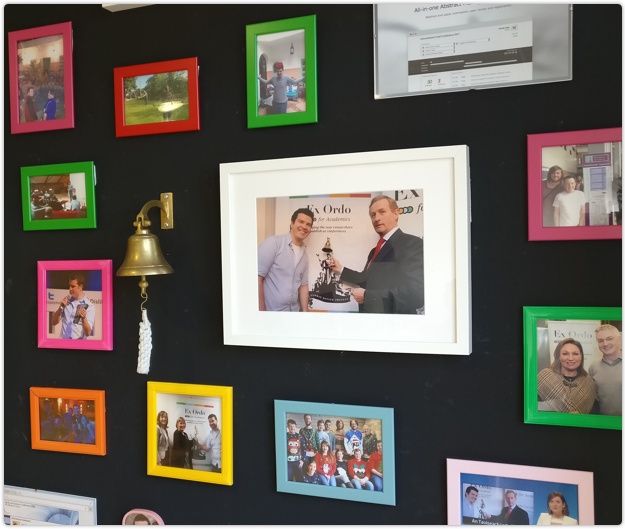 Close to the door, hanging beside a picture of our CEO and the former Taoiseach Enda Kenny, is a small golden bell. We have used the bell since the early days of the company to celebrate any milestone or achievement we may have.

We were fortunate to have the former Taoiseach visit our previous office in 2014. We were fresh from sealing a deal with the European Space Agency. We felt it was only fitting for the Taoiseach to ring our bell in celebration. The moment was captured by the reporters in attendance and made it onto the national news that evening.

We still ring it during our company-wide Friday catch-up whenever there’s celebration required. 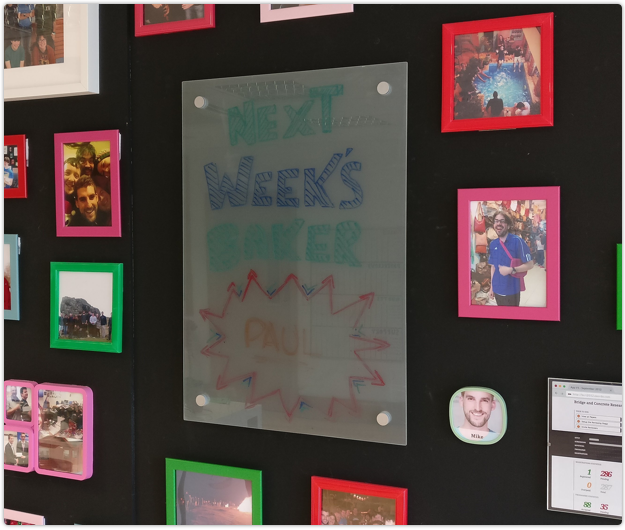 There are two glass boards on either side of the wall. Each of them carries an important message. The one closest the door announces the baker for the week. The baker is required to bring in something sweet for the rest of the team that Friday, and they get the honour of nominating the next baker.

The second board announces the date and co-organisers of our next Ex Ordo Friday. We hold one every three months as a way of bringing the team together, celebrating the achievements of the last few months and blowing off some steam. We have been all sorts of places on those Fridays; paintballing in Limerick, boat-tripping on the Shannon, CEO chasing around the streets of Galway, and most recently canvas painting in the studio of a local artist (hello Finbar !).

Our story in frames

The wall has many more stories that deserve to be told, such as the one behind the picture of our CEO Paul and a camel, or the one behind a simple train ticket.

But perhaps it’s best to let the wall speak for itself. After all, 256 pictures tell quite a story. 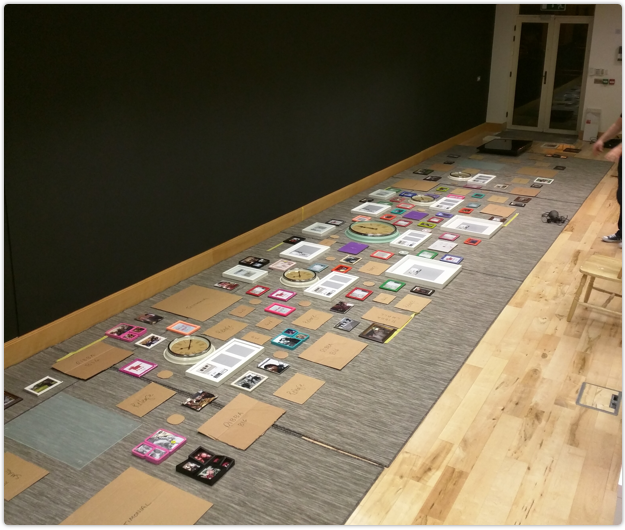 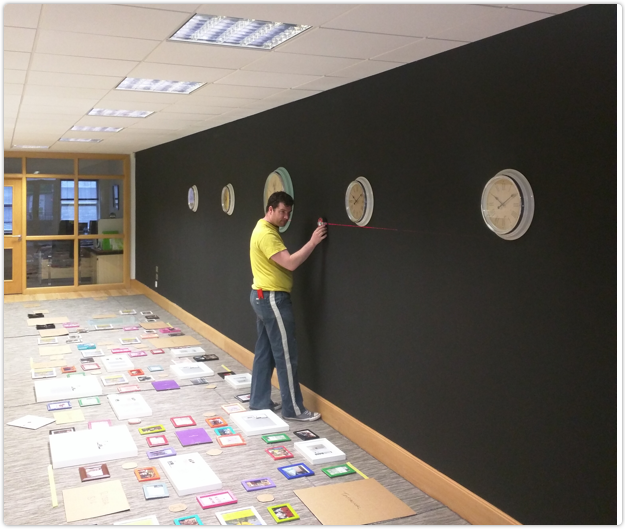 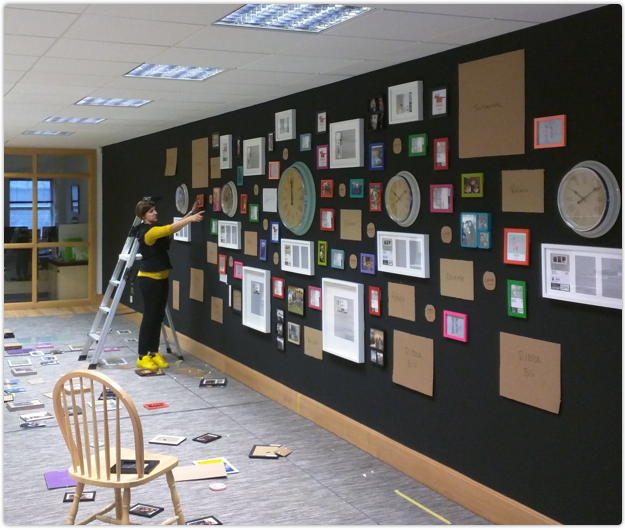 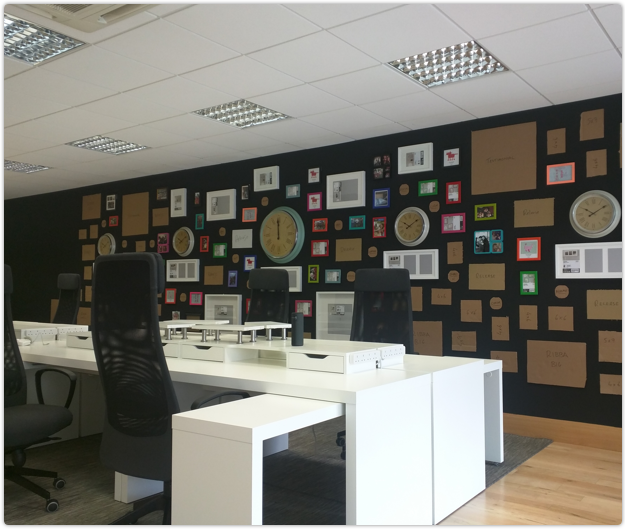 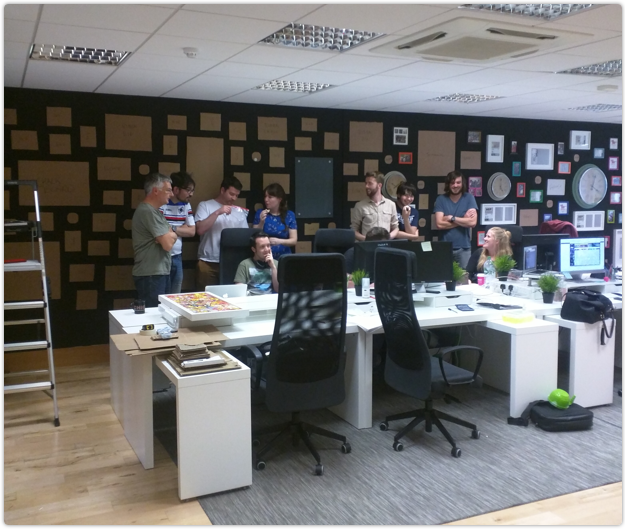 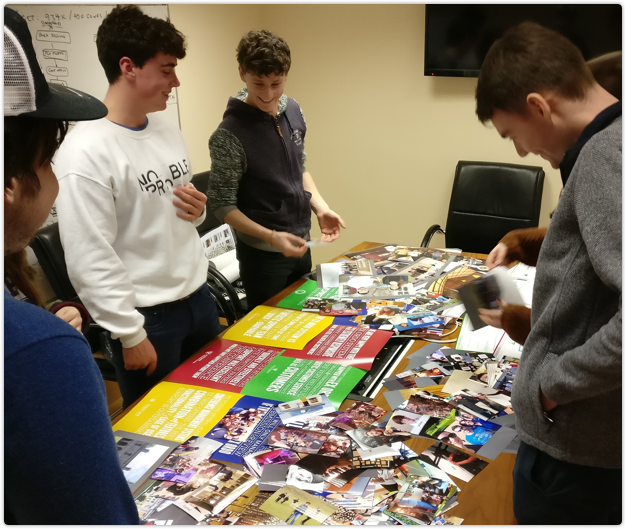 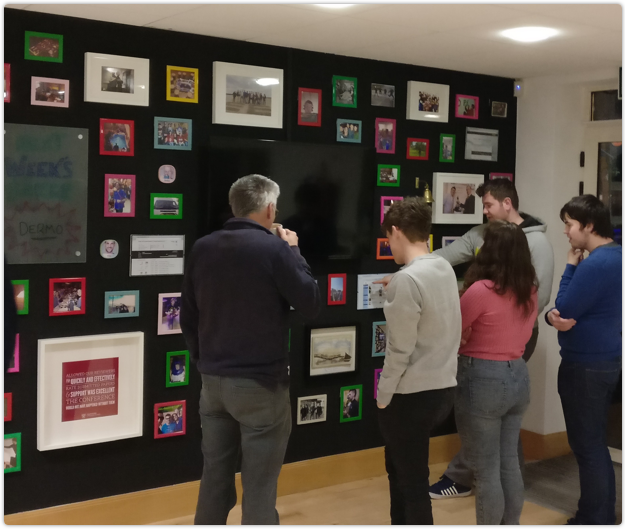 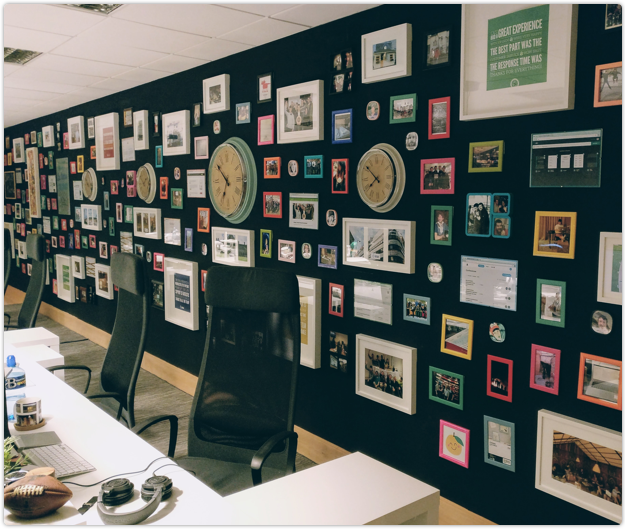 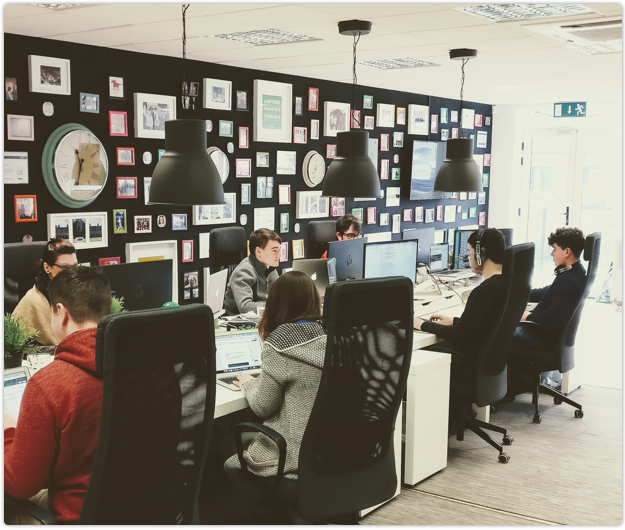 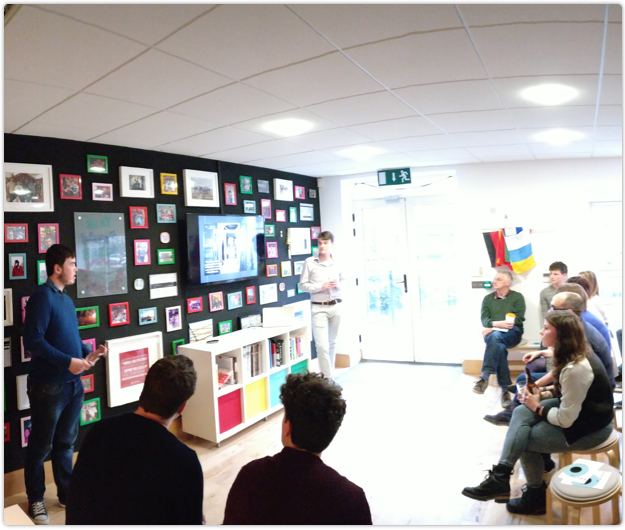 Laura brings a wealth of experience and customer-focussed approach to the Ex Ordo team as they work towards the next generation of research conferences.

Check out this interview with our CEO, Paul Killoran, as he chats about the latest stage in our company journey, and current search for a CCO.

Ex Ordo has appointed Paul Peters as Non-executive Board Chair. He joins with vast experience in academic publishing, supporting researchers and business strategy.

Ex Ordo has appointed Giuliano Maciocci as CPO. He joins with experience in academic publishing and researcher support.

The Society for Scholarly Publishing (SSP) will use Ex Ordo to manage their call for proposals for the next three years.

A coffee, a pint, and a new job

Developer Raúl Arribas reminisces about his move to Ireland, and how things have changed over the past five years.

Go to our pricing page and get a quote delivered to your inbox.