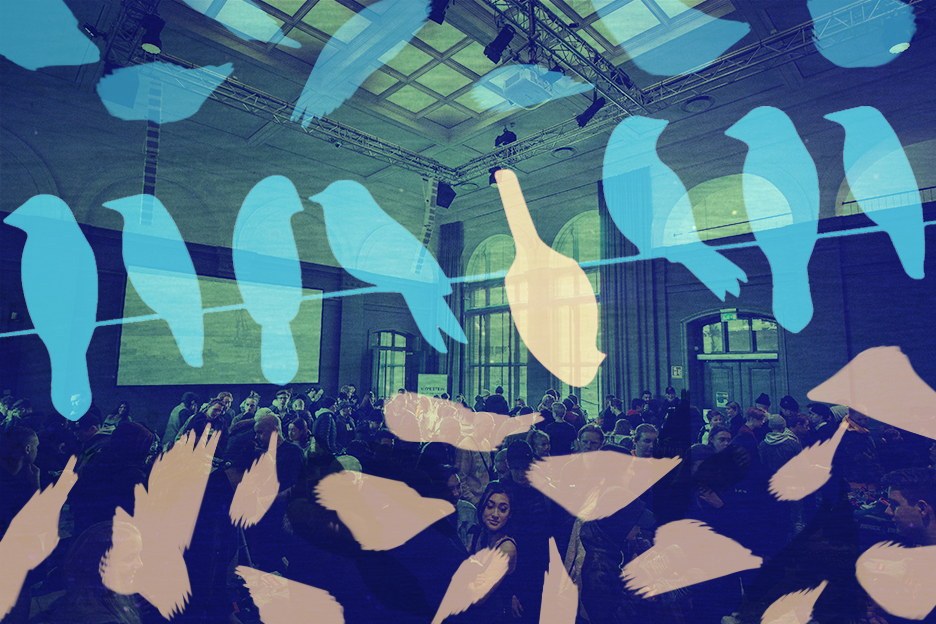 How an international politics conference is rewriting its rulebook on academic conference design.

An academic, a journalist and the director of a think tank walk into a pub. Sounds like the beginning of the 67th annual conference of the Political Studies Association (PSA).

Held in Glasgow in 2017, the event was a fresh take on the orthodox. Under the guidance of that year’s academic convenor, Dr Mark Shephard, and the support of the PSA’s trustees, the annual conference was redesigned as a space to revitalise the profession.

“Dr Shephard realised this [2017 event] was a good opportunity to think outside the box in terms of how an academic conference should look,” says Avnish Patel, the PSA’s events and marketing manager. “A conservative conference programme can get quite repetitive if you’re sitting theatre-style and watching a row of speakers. And while the event is primarily a forum for academics to present their work, a key aspect of the PSA’s mission is to boost public engagement with understanding politics, so we decided to hold some events to increase engagement with the local community in Glasgow too.”

Which brings us back to the academic, the journalist and the think tank director in the pub, debating Scottish nationalism in front of an audience of delegates and politically informed Glaswegians. The debate kicked off three days of academic conference design for the 21st century.

The result was an event that wandered beyond traditional academic bounds to engage with the broader intellectual ecosystem.

The PSA’s membership stretches from theorists and practitioners to policy-makers and researchers in political science and current affairs. So the organisers are continuing to redesign the conventional conference programme to appeal to distinct groups of members. In Cardiff for the 2018 PSA conference they dotted bespoke events throughout the conference, like a welcome breakfast for department heads, and another for conference newbies which focused on what to expect from the conference.

The PSA’s early-career network had the benefit of events like a publishers’ roundtable. And to encourage their participation in the conference, the organisers promoted the use of early-career researchers as panel chairs and discussants where possible. A one-day undergraduate conference based on the main conference themes and aimed at inspiring undergrads from all backgrounds to pursue political studies also took place straight after the annual conference.

The organisers put serious work into creating panels that bridged academia and practice, and the pub debate wasn’t the only conference event open to the public. There was also an open screening of a documentary on U.S. politics followed by a discussion led by academic experts.

“We’ve made it clear we don’t accept all-male panels,” says Avnish. “It’s something we’re very positive about. It brings more people into the conference and encourages more participation, and it’s obviously the right approach to take to reflect the diversity of the profession. And in the call for proposals, we encourage academics to put forward BAME [black, Asian, and minority ethnic] speakers and panellists from within their departments.” These steps are just part of the PSA’s bigger plans to encourage participation.

The conference coincides with the Easter school holidays, and the PSA recognised the difficulty this posed for people with families. So the organisers met them halfway by welcoming delegates to bring their children along. “We offer subsidised childcare for our members to try and make that easier for them. Year by year the uptake is increasing and we’re quite proud of that.”

And it seems their work is paying off. Although policies like the mixed-panel rule can’t always be enforced – such as when a last-minute withdrawal sees a panel go from mixed to all-male – these are the exception rather than business as usual. “We’ve done quite well in terms of high-level speakers [at the PSA’s annual conference] reflecting the diversity of the profession more widely,” says Avnish.

Recognising the importance of space

As to more practical measures, the association wants to leave creaking AV, rigid room structures and accessibility issues in the past. “With older venues, the infrastructure hasn’t necessarily advanced in terms of AV, layout and mobility issues, so it can be difficult to be flexible. With modern venues, you feel attendees are getting more value for money, and it makes our life easier in terms of organising the conference and handling logistics.”

And they’ve recognised the benefits to delegates of holding events outside of the traditional conference structure. “Holding [the debate on nationalism] in a pub was really good for us in terms of engaging with the wider community. But it was also about taking our normal attendees out of the academic environment and getting them to put their ideas forward to members of the public.”

In terms of feedback on the new conference design, PSA’s members want more of the same difference.  And when spring 2019 brings the 69th edition of the event to Nottingham, it won’t be a carousel of dusty formats and the same old faces. Rather, delegates will be engaging in an academic conference designed with broad horizons and space for fresh perspectives at the table.