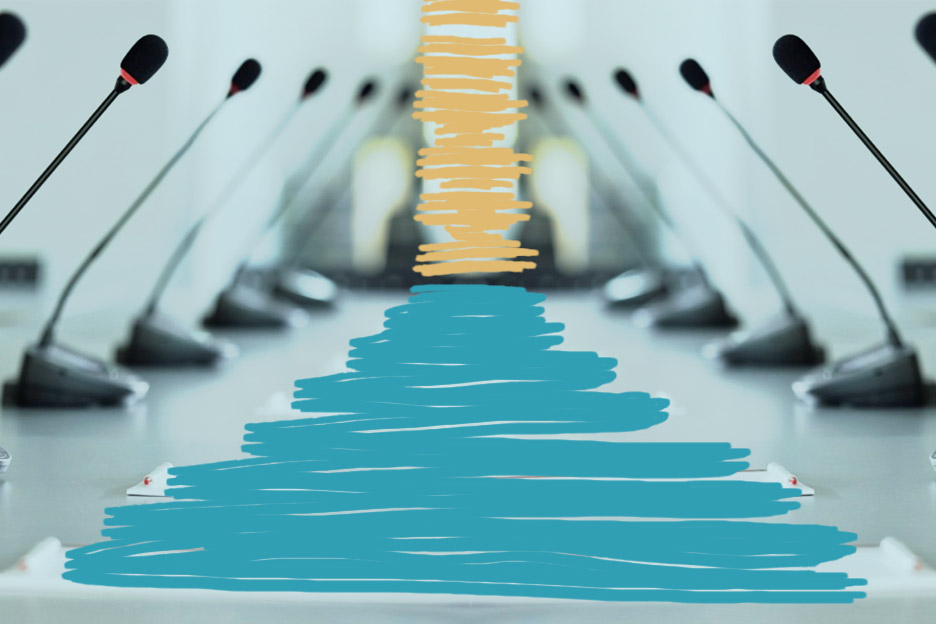 So you’re going to be a discussant at a conference? Mighty stuff. Here’s what you need to know.

Being a panel discussant at an academic or research conference can be a great experience. Developing the skills of a discussant help you improve your own academic writing. It’s also an opportunity to synthesise work that’s on the expanding frontier of your field and lead a discussion on it with your peers. (Plus, the added visibility certainly won’t hurt your career.)

Most panels at an academic conference are led by a discussant and moderated by a panel chair. But where do the two roles diverge?

What’s the difference between a panel chair and a discussant?

Generally speaking, a panel chair’s role is to be responsible for the overall planning and execution of a panel. Like other session chairs, before the conference, they’re usually responsible for flagging withdrawals with the programme chair (who’ll be responsible for the overall conference programme). They’ll ask panellists to circulate their material to the other panellists — and the discussant — so they’re primed for discussion on the day. They’re also expected to begin shaping the panel with the help of the discussant.

A discussant’s role, on the other hand, is to be responsible for synthesising the papers presented at a panel. Before the event, they’ll read each of the papers and prepare analytical or critical commentaries on them. They’ll also be in touch with the session chair to help shape the session and consider its time constraints.

During the session itself, a panel chair is responsible for opening the session on time and getting things rolling with some introductory remarks to the audience. They’ll also introduce the panellists, and allocate enough time to each speaker (including the discussant) and ensure the session ends on time. Some academics love to talk, and the audience and other panellists rely on the chair’s ability to hurry them along when needs be.

During the panel, a discussant will help the audience better understand the papers presented by serving as a commentator on them and the issues concerning them. They’ll also give presenters feedback to help them move their research forward. This might take the form of remarks during the panel, written feedback supplied privately, and/or individual discussions after the session. The discussant is also responsible for asking questions intended to stimulate discussion among presenters and members of the audience.

One word of warning: conference panel structure can vary from discipline to discipline. For example, sometimes discussants may also serve as the panel chair, or even as a panellist. So check the call for panel proposals to see what’s the norm for your event.

And if you’re still unsure, check with the programme chair exactly what’s expected of the discussant and the chair.

7 Ways to be a great panel discussant

Now, to the job at hand.

Because being a discussant involves on-the-spot interaction, it’s more difficult to prepare for than simply presenting a paper. And being a good panel discussant is a skill that takes some time to learn. Discussants most commonly go awry in one of the following ways.

1. Focusing on details in the written paper not mentioned in the presentation, thereby baffling the audience.

2. Ignoring the “discussion” part of the role in favour of giving feedback. This negates exactly the thing a panel is supposed to facilitate: the exchange of ideas.

3. Waxing lyrical about your own personal agenda, which isn’t appropriate.

4. Being overly negative and nitpicking, which, again, not appropriate.

But with some preparation and a bit of practice, you’ll get there. So if you’re an early-career researcher looking to hone up your discussant skills before your next conference, let’s dive in.

1. Decide if you’re the right person to act as discussant

Being asked to be a discussant is flattering. But if you’re a fairly junior academic or researcher, consider whether it’s the right role for you to play. Particularly if the panellists are more senior or more established than you. “The presenters-and-discussant(s) format lends itself to the posing of thorny questions by the discussant directed at the presenters, and this might lead to some role strain if the discussant is a graduate student and the presenters are established scholars,”  writes Patrick Jackson, a professor at the American University in Washington DC.

So think about whether you’re ready to carry this mantle, and if not, advise the group putting forward a panel proposal, to invite a more established, well-known figure in your field to act as discussant instead, advises Karen Kelsky of The Professor Is In.

2. Give yourself enough time to digest the papers

Read the papers carefully to understand their contributions, strengths and weaknesses, and what the audience needs to know about them. And when writing your comments, don’t just summarise the work to be presented, focus instead on adding something new. This could be some analytical or critical commentaries on the significance of a paper and the contribution it makes to the literature. Or a description of how this work is applicable beyond the focus the authors have given it.

For a breakdown on things to consider, try this list of tips.

3. Save detailed commentary for one-on-one feedback

Your role as a discussant isn’t to bless authors with an additional (and very public) peer review. You’ve got limited time to have your say and your commentary is primarily for the audience, only secondarily for the panellists themselves. So limit it to appropriate big-picture analytical or critical commentaries.

And if you have detailed comments, email them to the authors or have a one-on-one chat with them outside of the session. The authors and audience will appreciate you for this, and it means you’ll be better able to dedicate more time to opening the floor for discussion.

Recognise that abstracts and papers submitted to a conference are often not at the same level as the published research you read in journals. For the most part journal papers are re-drafted and polished many times over, whereas conference papers reflect the most up-to-date research so tend to be more rough-hewn.

So don’t go too hard on papers because you’re disappointed in their quality. But if you think a paper is sub-standard, note this in your written comments, don’t use the panel as a way to humiliate the author. “Don’t be afraid to disagree and critique, but do so in a spirit of respect and good will,” say Jim Conley and Mark Stoddart in their list of modest proposals for conference participants.  “Fairness, grace and good humour will do more for your reputation than pulling rank, showing off superior knowledge, or attacking a presenter who happens to use an approach that you don’t like.”

By the way, sometimes as a discussant you’ll receive papers at the final hour, or you’ll sit through a presentation that barely resembles the draft you received weeks before. In cases like these, the presenter should flag this with the audience. If they don’t, it’s ok to make attendees aware you didn’t have the material to do your job properly, but don’t waste time scolding the presenter.

5. Adjust your comments on the fly

Once you’ve drafted your comments, be prepared to adjust them during the paper’s presentation. This will ensure a more natural segue from presentation to discussion. For example, if a presenter hammers home a particular point, you probably don’t want to rehash it. And if there’s something the paper laboured over, but the presentation doesn’t touch, it’s not particularly helpful to mention it to the audience.

And on the flipside, if a presentation is “unclear about something really important and central in the paper, you might help the author out by gently clarifying the argument in your comments so that your audience better understands the value of the paper,”  writes Jack Lucas.

6. Use the audience, dammit

Given that panels are supposed to be based on the active exchange of ideas, it can be pretty disappointing for an audience to be simply read aloud to.

While you can’t change the presenting style of your panellists (who may insist on simply reading aloud their presentations), the role you play as a discussant gives you the perfect opportunity to spark a lively discussion. So draft your comments so they raise questions of the panellists, call on input from the audience, and encourage the presenters to respond to aspects of each other’s work.

You could also play with embedding tech in your panel. For example, if your conference has a mobile conference app or active Twitter feed, is there scope to use live audience polls as part of the session? This can help get the audience involved if they’ve been passively listening for the best part of an hour.

7. Remember, it’s not about you

Being a discussant doesn’t mean you’re given a soapbox to bang on about the many and varied qualities of your own most-recent paper. Nor is it an opportunity to lament a lack of funding for a particular branch of research, or talk about anything else that’s not related to the panellists’ work. So don’t wander off the path into a forest of tangents.

Make your points, try to facilitate the conversation, then get out of the way.

I heartily recommend Patrick Jackon’s excellent piece on creating debate in your role as a panel discussant.